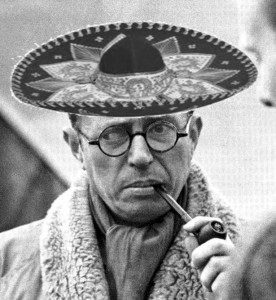 “Jalapeno, Jalapeno, Jalapeno, Jalapeno.”
I’m here to tell you about a wonderful new philosophy,
That has raised my consciousness as well as my cholesterol.
It’s called Tex-Mexistentialism.
It all got started with the great philosopher Juan-Paul Salsa,
Who wrote, “To Bean, or Nacho to Bean, that is the Queso.”
He was followed by his great student, Descarta Blanca,
Who wrote, “I Pinto, therefore, Cayenne.”
Some trace it as far back as ancient Grease,
Where the great thinker Aristortilla wrote the book Plata’s Repulpo.
Meanwhile, over in ancient India, they believed in Chili con Karma –
That what Casa round, Carne’s around.
And over in the Holy Land,
The prophet Masa brought the Hebrew children The Ten Comidas:
“Thou Salt not Tequila.”
“Honor Tamale and thy Papaya.”
“Blessed are the Migas, for they shall Ranchero the Burps.”
“Give a man an Enchilada, he’ll Taco Mole.”
“Arroz is Arroz by Flameada name.”
“In the Picante, Guisada Cerveza’d the Hongas and the Verde.
And he saw that it was Food.”
I’d like to close by reciting The Lard’s Prayer:
“Our Fajita, who art in Huevos,
Pollo’d be Muy Bueno.
Thy Corona come, thy Chili be Con,
On Cuervo it is El Jefe.
Forgive us our Tres Amigos,
As we forgive those who Seis Salsas against us.
Lettuce not into Tomatillo,
But Nuevo us from Fritos.
For thine is the Gringo, the Agua and the Chorizo.
In the name of the Flauta,
And of the Flan,
And of the Frijole ghost.
A-Menudo.”