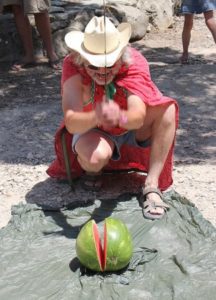 Another example of the Big Easy’s genius for inventing bioregional religions, and further proof of Steve’s adage that everything you’ve ever heard about New Orleans is true. Jack the Tutu Man is a living, breathing character, a social worker by day and watermelon priest the rest of the time. He’s also one hell of a Cajun dancer. Still another hobby is running marathons, which is how he started wearing tutus. Somewhere along the line, he started doing in watermelons at the end of the race, with a samurai sword that dangled menacingly from his belt. He doesn’t have a permit to carry a concealed sword into the New Orleans Jazz & Heritage Festival, so you can see him use a different method of execution in the video below, filmed at the Fais-Do-Do stage. There’s no disclaimer that no watermelons were harmed in the filming.

The Watermelon Sacrifice is a classic New Orleans ritual, like Mardi Gras or jazz funerals, in that there’s really no difference between the actor and the audience, the dancer and the dance. If you haven’t joined in, you’ve missed the point.

The watermelon chant, faithfully reproduced in this song, is an old street vendor’s call, lifted from the pages of the Creole folklore treasury, Gumbo Ya-Ya. It builds in intensity as the procession winds around, culminating in what the Greeks called catharsis – a climactic moment of release and terror that’s shared by the whole group. They say the tradition of Greek tragedy evolved out of older rituals of sacrifice. Christians are no strangers to the idea, either, especially if you’re a strict Catholic who thinks he’s drinking real blood and eating real flesh. Steve sticks with watermelon.

After many years of admiring Jack from the tail end of a conga line, Steve wrote the song below, which led to several gigs as Jack’s warmup act. When Steve moved to Texas, Jack asked that he become a Johnny Melonseed. When the time and place were right, he led his first sacrifice, out at the Kerrville Folk Festival. “I started out feeling a bit ridiculous,” he says, “but by the frenzied climax, I was channeling the Tutu Man. Which meant I had to go back, Jack, and do it again.” And again. The ceremony took root, and he’s kept on spilling seeds on the ground for more than 15 years. Few mortals know exactly when the mysterious Watermelon Man will appear, in his signature cowboy hat and watermelon cape, around the corner from the Kerrtry Store. He strikes, the people are nourished, and just as quickly as he slings a machete, he’s gone.

Over the years, the ceremony has survived the attacks of the watermelon-huggers, who tried to hijack the sacrificial victim. It’s survived the signs saying, “Stop the senseless slaughter of the baby watermelons.” Now, kids who used to follow the Watermelon Man are bringing their kids, to be washed in the blood of the watermelon, and to realize this timeless truth:

Don’t try this at home.

If you’re goin’ down to New Orleans,
There is a thing that you ought to see.
On Thursday nights in summertime,
At a bar called the Maple Leaf,
Where everybody is a-dancin’ and a-whirlin’ and a-twirlin’
To the music of a Cajun band.
But when the band takes a break at midnight,
That’s when things get out of hand.

CHORUS
That’s when they come on down,
Meet Jack the Tutu Man.
He is the Tutu Man
For all of New Orleans,
And if you see him dance,
And if you see him shake,
He is the greatest sight you’ve ever seen.
And everybody knows,
When Jack is back in town,
It’s time to party down
And put the keg on ice.
And if the night is right,
And if the moon is light,
He do the watermelon sacrifice.
He do the watermelon sacrifice.

Now Jack, he wears a bright pink tutu.
He really drives the ladies wild.
He’s got a watermelon in his arms
That he cradles like a baby child.
All the dancers gather back behind Jack,
And they swing in a second line.
And they sway this way, and they sway that way,
And they sing these words in rhyme.
They sing,

Now all the dancers gather round, in a circle in the street,
And they lick their lips and laugh.
While Jack jumps around like Jean Lafitte,
They are thinkin’ of the fatted calf.
Now, Jack, he sets it down on a cloth on the ground,
And he lifts his sword up high.
Then he howls just like a hurricane
And the watermelon pieces fly.
There’s a piece for me and a piece for you,
And everybody eats their fill.
Then the band strikes up “Big Mamou,”
And we dance all night until, till, till.