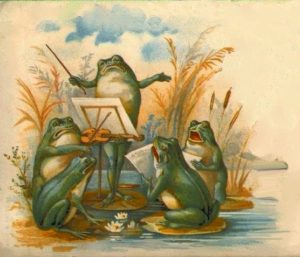 Anyone who knows Steve for more than a few minutes becomes aware that he has a fetish for frogs. They festoon his South Austin home, Casa del Frog, which he likes to say is decorated in Early Frog. They decorate his home camp at the Kerrville Folk Festival, Kamp Kantigree, where they are frognapped each year by the cow-worshippers at Camp Stupid. He is often asked why.

The origin of his amphibious obsession goes back to his years in New Orleans, and like all true New Orleans stories, it’s even stranger than you think.

One of the endearing things about the Catholic church has always been its ability to make a place for folk religions and their deities. Austin gets the soulful art of Mexican milagros, altars and festivals. Back in New Orleans, they got Voodoo, which substitutes saints for the gods of West African slaves. What better place, then, for the birth of a bioregional religion based on that beloved denizen of the swamp: the frog?

Like so many New Orleans traditions, it all got started one Mardi Gras day, round about 1985. The conspirators, led by the Rev. Dan Meyer, decided it was time to put the fun back in fundamentalism. They went down to the French Quarter to harass religious fanatics, who were standing on street corners with megaphones harassing everybody else — commanding them to quit sinning, which on Fat Tuesday, is like exhorting a river to stop rolling or a frog to stop singing.

And lo, there appeared on Decatur Street a group of celebrants bearing a cross, on which hung a giant, paper-mache frog. Whenever a street preacher launched into his rap, they would pipe up a veritable froggy chorus, proclaiming the good news about the deity who croaked for our sins. In short order, the preacher would pack up his soapbox and look for another spot to be saving souls from themselves.

Steve first encountered The True Church of the Great Green Frog when someone handed him a card which read, “Get Out of Purgatory Free.” It seemed like a sensible notion to him. He soon found himself writing the song below, which fully lays out the life and glorious works of Our Frog, the Rananoster. Some years later, he played it for the great Irish songwriter, Tommy Sands, who suggested adding a singalong chorus.

Steve thought the song was just a hop-and-run parody, but The Great Green Frog had other ideas. Native Americans say that you don’t choose your totem or spirit animal. It chooses you. Frogs started appearing everywhere he went — both living ones that liked to plop in his lap and his tent and the wealth of frog icons that have been gifted to him. It didn’t take long for him to stop worrying and love the frog.

He takes frogs as omens of good fortune. In ancient times, they were fertility symbols, and they remain the greatest group singers of the animal kingdom. They feel at home in more than one environment. And they’re kinda cute, in a slimy sort of way. Steve found out that being green is pretty easy, after all. To paraphrase the venerable Austin sage, Oat Willie: Onward, through the frogs! 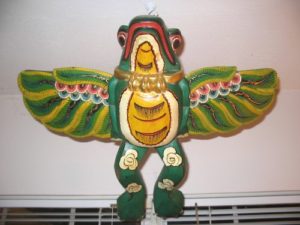 Away up the river, sitting on a stump,
Eating up flies and needing room to jump,
The amphibious Jesus is sitting on a log.
We are the Church of the Great Green Frog.

Back in the year of 1 B.F.,
Three wise frogs saw a star up in the west.
They followed it over to Bethlehem bog,
Where the mother was cradling the holy polliwog.

Frog was the greatest that ever wore green.
He went to the desert, where no frog had ever been.
The devil tempted Him, but he squatted firm.
He wouldn’t sell His soul for a can of worms.

Frog was a ribbiter, just like His dad.
He gave a great speech called the Sermon on the Pad.
He taught us to pray to the Bullfrog beyond,
And he said that the meek would inherit the pond.

At the wedding of Rana in the marsh of Galilee,
There was just one fly to feed a family,
But frog made use of a secret charm,
And suddenly the fly became a swarm.

He healed the leapers, who had lost their legs.
He healed the ladies when they couldn’t lay eggs.
He drove out the Cajuns and the snakes and the dogs.
He walked on the water —
But then, so do most frogs.

Frog finally reached the end of the road
When he went in the temple and he kicked out all the toads.
They sold Him to a science lab. It wasn’t no joke.
They put Him in a jar, and there he croaked.

But that’s not the place where our tale does end.
He lay three days, then he hopped up again.
He leapt to the great lily pad in the sky,
Where there aren’t any gators, and there’s millions of flies.

So if you’re in trouble, and you just can’t win,
Send a prayer to the Frog, who croaked for your sins.
He is the wheel, of which we are the cogs.
The world is His swamp, and we are His frogs.