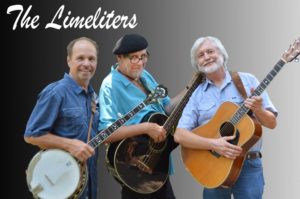 The year Steve was born, The Limeliters became part of the Great Folk Scare. Along with groups like the Kingston Trio, they introduced a generation to the great American folk songbag, dressing up traditional tunes with spirited harmonies and show business pizzazz. They also were the first group to record songs like Turn, Turn, Turn, If I Had a Hammer and Those Were the Days. The original members – Louis Gottlieb, Alex Hassilev and Glenn Yarbrough – have passed from the scene, but a succession of top-notch folk performers have carried on the unique arrangements and classic songs that instantly identify the Limeliter sound. In July, 2018, Steve became only the ninth artist to join the group, alongside veteran tenor/banjoist Don Marovich and bass player Andy Corwin. With his rich baritone, guitar chops and deep knowledge of traditional folk music, Steve will be helping the band move into its 60th year and beyond, with its mission to “Pass the Music On.”

For more info, history and pix on The Limeliters, you can check out two great websites. Limeliters.com is the official website, while the longtime fan site Tribute to the Limeliters is lovingly maintained by Harold Wood at limeliters.net. You can follow their latest news and Like them on Facebook here.