Inhale to the Chief

The winning pun in the 2001 O.Henry Pun-Off World Championship, inspired by then-President Bush’s repeated refusal to state whether he had ever used cocaine during what he called his “irresponsible youth.” Which might help to explain why he sent 130,000 young Americans looking for weapons of mass destruction in Iraq.The recording features OIiver Steck playing “Hail to the Chief” on accordion. 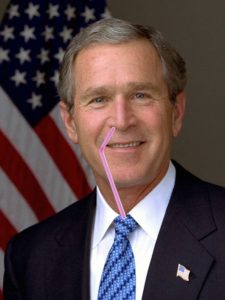 My Kilo Americans. Let me Freak to you about a Homegrown Texan, who has Resin to the Highest Possession in this great Hallucination, the original Come-Pushing-It conservative, the Pass-the-Hemp of the Fume-Lighted States, George Dubya Bushel.

Then he came home to Marijuana those Texas girls. Soon, opportunity Narced: a Grass-roots run for the Opiate Office. His campaign Stoners gave Sinsemilla Dealers, Amphetamine to IV advertising.

But election day was a Heroin experience. The votes were evenly Spliff. The lead Zig-Zagged for weeks. It was Reefer Count Madness! But thanks to the Supreme Snort, he won by a Nose.

He’s still Burning the Ropes of the job, with help from Colin Powder, former Head of the the Joint Sheafs of Stash. They’re trying to Psychedelic-ate balance between Tokes cuts for the Roach, and helping the Needles, while Cheeching kids to Weed, by giving Tracks dollars to the Free Methodist Prayer Force.

He’s on a Roll, and we’re all sitting on Ecstasy what he’s Cocaine up next. So when you hear “Inhale to the Chief,” just say Snow.